Zuzana Maderová writes from Silicon Valley: You have to show up at startup conferences in America 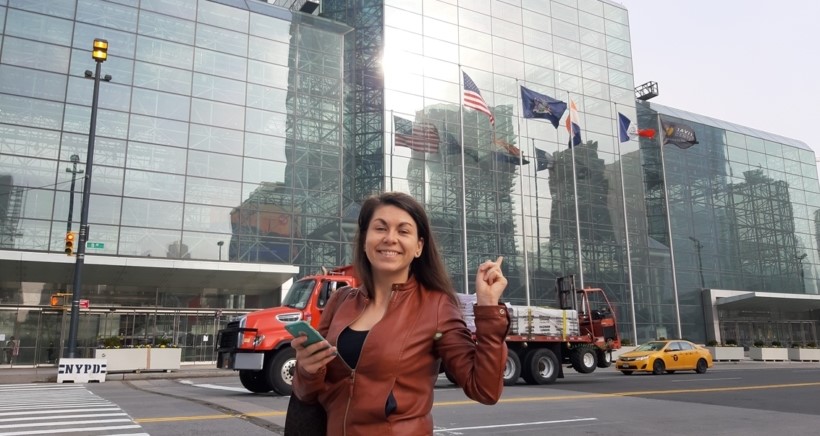 More often than not, it’s much more difficult to establish yourself and take off in the United States than it may seem at first glance. That being said, one of the best ways to attract customer and investor attention is at organized conferences. Czech startup Enehano has now become an exhibitor at two major events in North America, led by the head of U.S. expansion, Zuzana Maderová. Exclusively for CzechCrunch, Zuzana writes to readers worldwide about the value in these conferences and how to best prepare for them.

First, we presented at Tech Day in New York at the beginning of May, which is one of the biggest startup events in the United States. Three weeks later, we went to Canada at Collision in Toronto, the fastest growing technology conference in North America. From the very beginning, I have to honestly say that it was a challenge.

Perhaps you have already considered going to a similar event and are hesitant about whether it would be valuable or if your startup is mature enough. In my opinion, the best time to go to these events is if you have a tangible product and you truly have something to differentiate yourself from the competition. 400 to 600 companies present themselves in Toronto, and if you can provide a unique, valuable product or service, there is a better chance that you might just fit in.

Before deciding whether to give it a go, you should be clear about whatyou expect to get out of the conference. Is it mainly about business exposureor sales? If so, I have to warn you that the exposure effect is minimal. Frommy experience, the greatest added value you will get is the honest feedbackgiven to your service or product.

The next important thing to consider is the contacts and networking you can get at these types of events. At both conferences we presented Salesforce consulting services and our Ageniq agency software. Our solution is completely new, so we wanted to hear feedback on a massive scale.

When you decide that attending is exactly what you need to advance your startup, actually getting there is fairly easy. Basically, just register in advance (beware of limited capacity at some events) and pay the participation fees, which usually end up being 10 to 50 thousand Czech crowns for your team, or 500-2000 USD (CzechAccelerator helped us with this).

Location impacts yourexperience, too. New York, for example, has cheaper registration fees thanToronto, but on the other hand, Toronto is a thriving city with many events andnetworking opportunities. You can get in to some of them for free, so it's goodto be around, even if you're not exhibiting at the conference.
‍

In my experience, a fundamental influence on your success (or lack thereof) is the preparation you do in advance. There is usually an application for each conference where you can find lots of useful information, like a list of all the exhibitors. Use this information and try to reach out and set times to talk with them in advance.

I want to emphasize the benefit of networking before the actual event. When you attend, other companies will already know who you are, and there is a noticeable difference in conversation when you already have some contact rather than going in completely anonymously.

Other things you can do beforehand that can help you out:

• Check the layout of the organizers' stand, find out what they will provide for you, and what it actually looks like (I suggest you send a photo if you have something to show at your stand, etc.)

• Be aware of rules and restrictions. We ran into this issue mainly in Toronto, where only our monitor was allowed and it was forbidden to give away food.

• Have a concrete plan of which events and networking opportunties you want to attend. Most of them are very popular and often overlap, and it can be difficult to decide the best option on the spot.

• If you cannot find a list of exhibitors in advance, keep an eye on social media and hashtags so you can get some insight into who is heading to the conference.

• Prepare to focus 100% of your energy on the conference. Do worry about solving or fixing other things during it, otherwise you will go crazy and get nothing for your efforts.

• Set goals: what two or three things do you want to take away from your experience?

Another part of preparation is finding out as much information about the visitors of the conferences, too. Doing so allows you to customize your business tactics, your pitch, or even the staffing of the stand. In New York, the composition of visitors was roughly as follows:

In Toronto, from our subjective point of view, the audience was better. Fewer students (only about 5%) and fewer UX designers and developers (also around 5%). On the contrary, about one-fifth were start-ups. Therefore, I would recommend New York to startups who are interested in hiring.

If your target is real estate or finance, then Tech Day is a great option. Collision, on the contrary, is more general and also about five times larger. If you want to reach startups or investors, then Toronto is the right choice.

Because of the variety of visitors we've encountered, consider some extra activity to attract your target audience to your stand (paying off mainly in B2C). Popular options are different kinds of games, such as "spin-the-wheel" for chance to win AirPods, and so on.

Is it even possible to differentiate myself at all?

It is extremely complicated to distinguish yourself and to be intriguing to passing visitors. In addition to games, different types of visitor competitions are one of the most widely used options. Ideally, you should be able to tie the competition to what your company offers or solves, but this is not a requirement. Some exhibitors only needed a dartboard to get attention. The question, however, is whether such activity attracts only students, but sometimes it’s nice to have some activity at your booth for exposure and practice.
Additionally, at both conferences, we noticed that the crowd effect works strongly. If there are people somewhere, more and more folow immediately without knowing what's actually going on. Next time we would do something different at a conference, we would pay people at the booth to make their own crowd!

Other helpful props are anything that moves. Virtual reality is freaking people out right now, and when you have VR glasses on your stand, people come, try them and you can talk to them. Similarly, a demo works to help people remember your product. Technology is definitely not everything, though!

Managing staff is a different story. How many and what kind of people should you send there? Is the perfect language, business talent or expertise more important? It's pretty easy for me: the energy. The more energetic you are, the more willing people are to talk to you. Ideally, the best staffers are the most communicative people who can talk practically 24 hours a day and twice in one sentence just say "amazing". It has to be a show. And all the time.

Of course, the size of the event always determines the number of staff. Two people were ideal at Tech Day, which was smaller, but three would be better at the bigger Collision. We have seen such cases where there was only one person at the booth, but I think it's crazy. It is extremely challenging not only mentally, but also physically (prepare yourself for strength training in advance - you never know if you need to quickly rotate without a problem). You also want to be able to circulate around to see the other exhibitors, as well.

On the day of the conference, come as early as possible in the morning so that you can prepare your stand before the crowds begin to form.

If you have a demo product on your stand, prepare an offline version as well. Take into account that Wi-Fi is simply not reliable at events of this size. We encountered it quite commonly.

‍
100 competitors in front of you

Other than size, the biggest difference between conferences in the U.S. and North America is clearly in the networking. Be prepared for the fact that as soon as you stand alone for a while, it is quite common for someone to start talking to you; there is no standing alone. What's more, everything is much faster. For one or two minutes you talk, and if there's no match, you just move on as normal.

There are a number of techniques, procedures and rules in place for networking and pitching. I have selected a few important or useful ones:

• Start by asking what the other is doing.

• Don't sell your solution right away, but ask about the problems you can help with.

• Describe your product through the major selling points.

• Prepare the pitch in general so that everyone can understand it. But, also try to adjust it when you know who you're talking to.

• If you find after a while that the conversation is not going anywhere, try to quit it as soon as possible.

• Conversely, if there is a match, the ideal conversation ends with exchanging contact information.

• When the contact is a business card, write down on the card immediately after what business was dealt with that person. In the follow-up, such information will be worth its weight in gold.

‍
Is this the end?

Trust me, the conference itself doesn't stop there. Almost the opposite, actually. We were surprised that only a very few percent of companies and conference participants follow up conscientiously. The subsequent follow-up is crucial in deciding whether the mission was successful. That is why it pays to set aside a day’s time for following up.

We do follow-ups in two waves, the first of which runs the very next day after making contact (it doesn't make any sense the same day, they're all tired).

This first follow up is nothing complicated, you just need to remind yourself to suggest a future call and put it in your calendar. It is useful to have 4 different follow-up variations ready, and it is great if you can personalize it somehow (hence relying on your business card notes).

The second wave is like a reminder two days after the conference. Although it is often less successful than the first one, we, thanks to Salesforce, see who opened the e-mail and can continue to work with that information. This is all definitely worth it - go get yourself an amazing job with it.

Biggest Mistakes to Avoid during Digital Transformation Part 1
Since we've all agreed that digital transformation isn't an option,but a must, we might as well embrace it and learn how to best implement it.
November 9, 2022
|